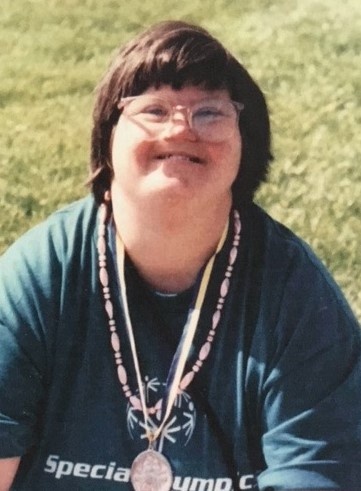 Barbara Ann Sanderson, 59 of Gaylord, passed away on Sunday, December 5, 2021 at home, surrounded by loved ones.

Born in Detroit on January 12, 1962, she was the daughter of Jimmie Sanderson and Janet (Fryer) Sanderson Bershback.  She later moved to and was a longtime Gaylord resident.

After completing special education schooling, Barbara worked in the mail department at Crossroads Industries in Gaylord until 2015.  She loved school and working at Crossroads where she made many friends.

Barbara was a member of the Wyandot of Anderdon Tribe where her name was Waab Mee Gwanse meaning “Bright Star”, which she was to her family and many friends.

When Barbie was born, we were told she might live to the age of 13.  Instead, we were blessed to have her until now, almost 60 years.  She has been the “Sunshine” in our lives, one of heavens very special children.  This poem perfectly describes the impact of Barbara’s life…

“A meeting was held quite far from earth.  It’s time again for another birth, said the angels to the Lord above…This special child will need much love, her progress may seem very slow, accomplishment she may not show.  And she’ll require extra care from the folks she meets down there.  She may not run or laugh or play, her thoughts may seem quite far away.

In many ways she won’t adapt and she’ll be known as handicapped.  So let’s be careful where she’s sent, we want her life to be content.

Please, Lord, find the folks who will do a special job for you.  They will not realize right away the leading part they’re asked to play.

But with this child sent from above goes stronger faith and richer love and soon they’ll know the privilege given in caring for this gift from heaven.

This precious charge so meek and mild is “HEAVENS VERY SPECIAL CHILD.”

Barbara was blessed with her mom, Janet Bershback, who survives; and two dads, Jimmie Sanderson and later Donald Bershback, both of whom preceded her in death.

Barbara’s family will remember her privately. Those who wish to honor her memory are asked to make memorial contributions to Crossroads Industries Client Activity Fund, P.O. 1337, Gaylord, MI 49734 or to the family.

To order memorial trees or send flowers to the family in memory of Barbara Ann Sanderson, please visit our flower store.
Send a Sympathy Card