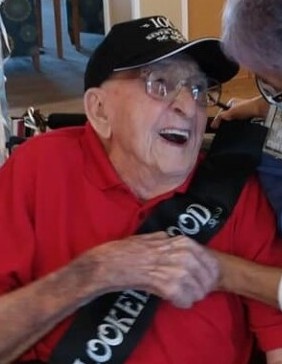 Charles E. Westphal, 100 of Gaylord, passed away on Thursday, January 7, 2021 at Meadow Brook Medical Care Facility in Bellaire. Born on June 30, 1920 in Jones, Michigan, he was the son of George and Colleen Westphal.

Charles proudly served his country in the United States Navy. For many years, he worked for Georgia Pacific. Once he was retired to keep him busy, Charles worked at Bob’s Modern Homes in Gaylord. He was an active member at Grace Baptist Church. He enjoyed fishing, watching football and was a big Tiger's fan watching most of the games. He enjoyed spending time with his family.

He was preceded in death by his parents; three children, Tim Westphal, Janet Ball and Jack Jones; his daughter-in-law, Diane Westphal; his son-in-law, Robert Carpenter; four brothers and five sisters.

Friends may gather with the family for visitation from 12:00 PM-2:00 PM Tuesday, January 19, 2021 at Gaylord Community Funeral Home & Cremation Service. Due to COVID-19 restrictions, a private family memorial service will follow. In lieu of flowers, those who wish are asked to consider memorial contributions to: www.gofundme.com/f/in-memory-of-charles-e-westphal?utm_source=customer&utm_medium=copy_link&utm_campaign=p_cf+share-flow-1

To order memorial trees or send flowers to the family in memory of Charles E. Westphal, please visit our flower store.