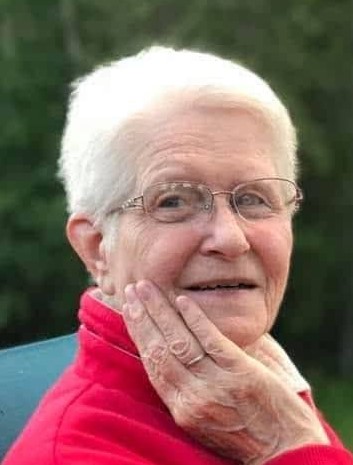 Born in the winter of 1936 Christine Martha Turnbull (Sinner) drew her last peaceful breath on July 25, 2020 while under the loving care of Bay Bluffs Nursing Home in Harbor Springs, Michigan.  Christine was born in Frankfurt Germany to Hans Sinner and Sophie Goebel who had Walter, Christine and Karl.  Sophie died while Christine was very young after which Hans married Hilde and had  Wolfgang and Eberhard. Hilde passed and Hans then married Ruth who had Elizabeth and twins Ursula and Helmut.  All her family reside in Germany, save her father, Hans and brother, Walter who have passed.

Christine’s early years were spent in war torn Stuttgart which had received heavy bombing during the war and where many nights she spent in underground bunkers.  Christine was sheltered by her Aunt Trudy (Hilde’s sister) during the war and received valuable lessons on how to run a household and life as a pastor’s wife.

After completing secondary education, Christine became an exceptional sporting goods associate in Stuttgart’s first Department store.  Years later she met a young US Army Private at a USO square dance in her hometown.  This man, Edward Alfred Turnbull, of Port Neches, Texas, would become her husband of 62 years.    Ed and Christine would have five children: Edward (Carol), Randy (Fay), Mark (Jennifer), Michael (Sandra), and Christy (Brian Johnson) and later adopted grandson, Joshua (Angela), all of whom survive her today.  These children would go on to produce a legacy of 11 grandchildren and 15 great grandchildren (and one on the way).

Once she married, Christine spent her years as a faithful homemaker to her five boys and daughter.  Her life was profoundly changed when she accepted Jesus as her Savior at a Billy Graham crusade prior to leaving Germany.  This led to a life involved in the church and a focus to raise her children with a Christian purpose.

Following a career in the US Air Force, Ed and Christine settled in Northern Michigan to raise their children, first operating their dairy farm then as a School teacher and pastor of Sage Lake Memorial Church of the Nazarene in the community of Hale, Michigan.  Through the years Christine was always active in community and church activities.  She was a Den Mother for Cub Scouts, attended most every school activity that her children participated in, taught Bible classes and Sunday school, was the missionary president for the Northern Michigan District Church of the Nazarene and even pastored Edward’s church for a year while he attended Olivet Nazarene College.

Having worked for so many years Ed and Christine, in lieu of taking on retirement, continued their devotion to their family by adopting grandson Joshua and raising him from middle school through college graduation.  Sadly, not long after becoming empty nesters Ed suffered a stroke which left him severely cognitively impaired and now redirected Christine’s maternal instincts and duties from her children to her husband.  Christine faithfully cared for Edward for 10 years until her health declined to the point of requiring care for herself.

Although she lived in the country for most of her life, she was a city girl at heart. She loved nature, her fields of wild flowers, the pine trees, her garden and grape arbor, turkeys, deer, and a variety of birds. (Not so much the bats, but they did eat the mosquitoes.) She also was an avid reader and compiled a fabulous library of books. She enjoyed a good Hallmark movie– it was fun to watch a show together even though you might have been watching from different parts of the country.  Christine loved to listen to classical music, but what brought her great joy was when all 5 of her children would play their instruments in church.

Christine loved all her family and would pray for each one daily and lived a life that exemplified the love of God. She would offer words of encouragement and support and gave the BEST hugs!!! She was sweet, generous, and all through her life showed her selfless devotion to her family and others and was a Godly woman.  She was always searching to know God more every day as she trusted in Him. Her Bible is well read and has wonderful notes throughout.  Her greatest desire was to see each member of her family come to a saving relationship with Jesus Christ.

Christine will be awaiting a heavenly reunion one day with her family who survive her and to the host of people throughout her life to whom she has had a profound impact and the pleasure to show them the peace that can only be granted through a life lived through Christ.

Funeral services will be held at 12:00 noon Friday, August 7, 2020 at Gaylord Family Fellowship where visitation will begin at 11:00 AM.  (To allow for seating and meal planning, please RSVP to Mike Turnbull at 989-619-5650 by Wednesday, August 5th.)  Complete obituary information will follow shortly.

To order memorial trees or send flowers to the family in memory of Christine M. Turnbull, please visit our flower store.
Send a Sympathy Card