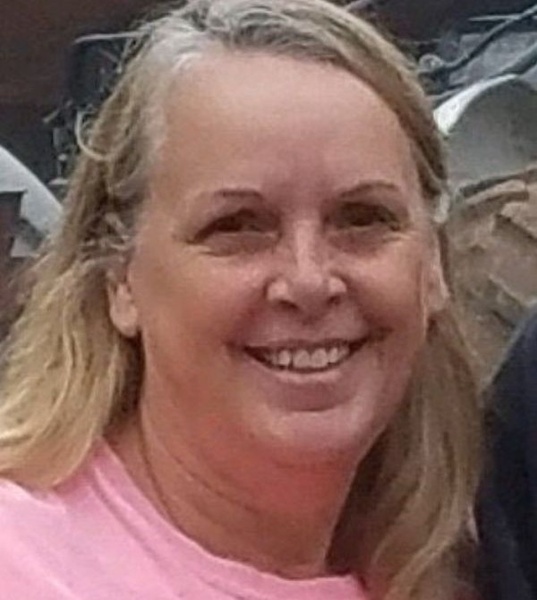 Born on January 31, 1964, in Flint, she was the daughter of Richard and Sandra (Wheatley) Berlin.  Growing up in Lapeer, Cindy was a 1982 graduate of Lapeer West High School.

She was a stay-at-home mom while her two daughters were young.  Later she went to work at Glen’s Markets, which later became Family Fare.   After many years of service, Cindy retired from the Gaylord store where she was produce manager.

In her spare time, she loved flower gardening and working outside around home, and always, barefoot, if possible.  She enjoyed baking, crafts, collecting snowmen and “Stitch” from “Lilo and Stitch” as this was the nickname given her by her husband, Bill.  Cindy loved spending time with her family, and she loved the Christmas season.  In recent years, Cindy and Bill enjoyed spending time at their cabin in Newberry.

She is survived by her husband, Bill.  They were married in Grayling on September 26, 2003.  Also surviving are her two daughters, Crystal (Kenneth) Gentz of Gaylord and Megan (Eric) Roeder of Frederic; Bill’s daughters, Lacey (Ryan Hakin) Smith of Grayling and Megan (Rob) Courtright of Grand Rapids; grandchildren, Eathen, Tony, Brayden, Isaac, Ella, Payton, Skylar and Callen; a brother, Richard (Cindy) Berlin of Onondaga, MI; a sister-in-law, Linda Berlin of Lapeer; several nieces and nephews and great nieces and nephews; and her beloved pets, dogs, Sophia, Lana and Billie; and skunk, Flower.

She was preceded in death by her parents and a brother, Michael Berlin.

A memorial service and celebration of her life will be held at 11:00 AM Saturday, May 14, 2022 at her home, 7963 Rosecrans Drive, Frederic, MI  49733.  Those who wish are asked to consider memorial contributions in her memory to St. Jude Children’s Research Hospital.

Please share your memories and personal messages with Cindy’s family below on her tribute page.