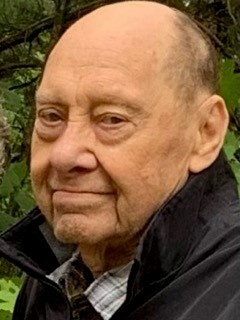 David Loughrige, 87, of Gaylord, Michigan passed away on October 4, 2020 after a long battle with kidney failure.

David was born in River Rouge, Michigan on December 19, 1932. Upon graduating high school, he enrolled in the Army and served in the Korean war. During his tour, he was hit by shrapnel from an anti-tank shell, permanently paralyzing his left arm and dominant hand. In the aftermath of the gunfire, he further endured being stabbed with a bayonet by enemy soldiers checking for survivors. For his bravery and sacrifice in the line of duty, David was awarded a purple heart. Upon returning home, he worked a few different jobs before finding his place with Chrysler from which he retired in 1993.

On July 30, 1955 David married the love of his life Joyce DeLong. The two enjoyed 65 years of marriage before his passing. Their lives were full of various moments of joy and pain, and their love shone most clearly whenever either required surgeries later in life. They lost their daughter, Diane, in 2015, which devastated them both.

More than anything, David will be remembered by his family as a loving father, grandfather, and great grandfather. When the children had school events, he could always be found in the crowd. He was good for a gold dollar for the little entrepreneurs of the family willing to give him a back scratch or comb his hair.

The funeral service will be held at 1:00 PM Saturday, October 10, 2020 at Gaylord Community Funeral Home & Cremation Service with Pastor Scott Distler of Gaylord E-Free Church officiatng. Military funeral honors will be provided by VFW Post #1518.  Visitation will begin at the funeral home starting at 12:00 noon.  In lieu of flowers, memorial donations may be given to Paralyzed Veterans of America.

To order memorial trees or send flowers to the family in memory of David W. "Slippery" Loughrige, please visit our flower store.