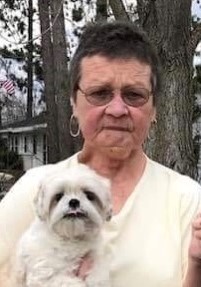 Born in Grayling, Michigan on June 25, 1951, Debra was the daughter of Claude and Lillian (Haskill) Dipzinski.  She grew up in Gaylord and was a 1969 graduate of Gaylord High School.

On April 12, 1975, she married Samuel A. Barber in Gaylord.  They lived for several years in Dewitt and Lansing while Sam worked at General Motors.  Debra worked in accounting and bookkeeping at Dimondale Nursing Home in Grand Ledge.  Later they returned to the Gaylord area where she worked as a bookkeeper at Lappan’s of Gaylord.

Debra and Sam lived in Elmira and Vanderbilt in retirement and spent winters in Portmansfield, TX.  Sam preceded her in death in 2016 and Debra moved to Gaylord last year.

She will be remembered by her family as a loving person who had a heart of gold.  Debra enjoyed her close relationship with her siblings, her nieces and nephews, great nieces and nephews and even great, great nephews.  She enjoyed cooking and feeding her family and many friends.  She also enjoyed playing cards, travel and spending winters in Texas.

In keeping with her wishes, the family will remember Debra privately.

To order memorial trees or send flowers to the family in memory of Debra Ann Barber, please visit our flower store.