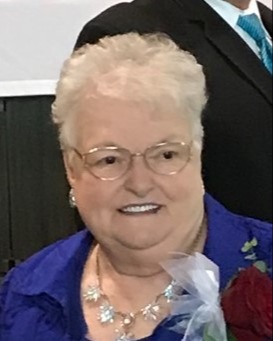 Born in Indian Prairie Township, Illinois on May 14, 1940, she was the daughter of Chloris and Freda (Milner) Hilliard.  Dorothy grew up in Rinard, IL, graduating from high school in Flora, IL in 1958.

Dorothy met the love of her life, Gary L. Courtright as a young woman in Illinois and they were married in Flora on February 1, 1965.  Shortly after their marriage, a job opportunity for Gary took the young couple to Albion, Michigan.  They began their family in Albion, where their son, Duane was born.  In 1970, they moved to Gaylord where their daughter, Tina, was born.  Since the early 1970’s they have lived in Waters where Gary’s business, Northern Truck Tank Service is located.

Dorothy was a dedicated, loving, wife, mom, grandmother, and great grandmother.  She enjoyed quilting and sewing, cooking, making homemade soup and ice cream, bowling, and ceramics.  Being a stay-at-home mom was important while the kids were young, later she worked for more than 20 years at the U.S. Post Office in Waters.

Dorothy is survived by Gary, her husband of 57 years; her children, Duane Courtright and Tina (Dale) Rodgers all of Gaylord; grandchildren, Regina (Michael) Stutesman, Valerie Courtright, Caralee Courtright, Rebecca (Eric) Cook, and Danielle Rodgers; great grandchildren, David and Jaxson Stutesman, and Lee and Blake Cook; a sister-in-law, Marjorie Hilliard of Rinard, IL and several nieces and nephews.  She was preceded in death by her parents; brothers, Archie, and Robert Hilliard; her sister-in-law, Pat Hilliard; her daughter-in-law, Pamela Courtright; and a nephew, Dale Hilliard.

A memorial service will be held at 11:00 AM Saturday, October 29, 2022, at the First United Methodist in Gaylord, where visitation will begin at 9:00 AM.  Those who wish are asked to consider memorial contributions to the family to assist with her great grandchildren’s education.  Checks payable to Gary Courtright may be made in person at the memorial service or mailed to Gaylord Community Funeral Home & Cremation Service, P.O. Box 249, Gaylord, MI  49734.

To order memorial trees or send flowers to the family in memory of Dorothy M. Courtright, please visit our flower store.