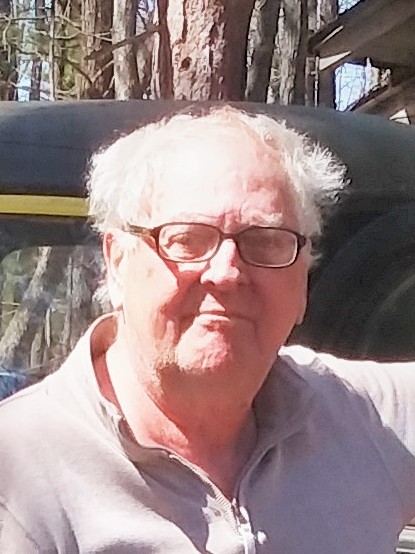 After seven decades of raising hell, chasing rabbits and barking at the moon, The Great Northern Skunk has passed to the happy hunting ground.  Herbert Charles Hutchinson is the son of Valerie and James Hutchinson and was given the gift of life on March 14th, 1947. With 11 siblings in the small town of Afton, MI, there were always friends and family to keep young Herbie busy.   He attended Inland Lakes schools until the family moved to Durand, MI which is where he graduated in 1965.  Herb had a short time to relax before the local draft board thought a trip to South-East Asia was in his cards.  He spent from July 1966 to July 1968 between Savannah, Georgia and Vietnam. During his time state-side, he married Deb Rigg from Standish, MI.  He served as a Jeep driver for a colonel and was a technical Draftsman.

After Vietnam, Herb came home to meet Phillip Charles Hutchinson his first son in July 1968, he earned a degree in Drafting from Delta College.  He welcomed his second son Cary Lee Hutchinson in July 1969.   He worked with his father for some time as a truck driver for GM/Leaseway hauling shiny, new cars across the USA.

After a divorce in 1978, he led a highly adventurous life across America with returns to Durand, Standish, Indian River, Mullet Lake and finally Afton.   Dad absolutely loved nature and living in his remote, open-air location near the river and lakes.  He downhill skied for more than 60 years and won the first-place trophy for Telemark (free-heel) skiing.  His love of downhill skiing was passed to his sons, daughter-in-law – Tina, and three granddaughters - Olivia, Haley and Hanna Hutchinson.  He loved his final days swimming with his great-grandson Alex.

He was an active volunteer with Special Olympics and helped each year that he was able.

Herb complained very little and was tough as hell to his last breath.  He was superb to the end.

Loving thanks to my Aunt Mary Sereseroz, whose beautiful, big heart and excellent experience helped Dad immensely in his final months while battling cancer.

Thanks for the continued friendship and help of Uncle Tom and Aunt Deb Hutchinson.  They really helped keep an eye and guide him since his diagnosis in 2014.

Also, thank you to my aunts and uncles who have kept him in your thoughts and helped him over the years, Audrey Hutchinson, Jim and Janet Hutchinson, Nicki and Bob Townsend, Joe and Paula Hutchinson, Art and Rosemary Hutchinson, Valerie and Ross Bassett, Ray and Dawn Hutchinson.

Herb was preceded in death by his brothers Walter and James and his sister-in-law Rosemary.

There will be a gathering for friends and family July 14th at noon at Northern Trax in Afton, MI  and a memorial at the Pigeon River following.   Dad’s wishes were to be cremated.

Please share your memories and personal messages with the family at www.gaylordfuneralhome.com
Arrangements are by Gaylord Community Funeral Home & Cremation Service.

To order memorial trees or send flowers to the family in memory of Herbert C. Hutchinson, please visit our flower store.