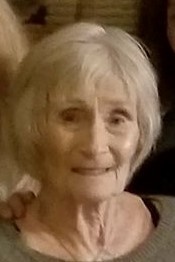 On March 18, 1973 Irene and Paul M. Larsen were married in Las Vegas.  They lived in southern California for many years before moving from Carlsbad, CA to Gaylord in 1994.

In retirement, Paul and Irene enjoyed traveling worldwide.  She was also a dog lover.

Irene was preceded in death by Paul on October 27, 2017.  Surviving are her children, Debra (Jerry) Carpenter of River Falls, WI, Pamela Zappa of Hudson, WI, Lawrence (Darla) Boisjolie of Ajijic, Mexico and Jeffrey (Bonnie) Gedney of LaQuinta, CA; 12 grandchildren; 8 great grandchildren; a brother, Sean (Sally) Tripp of Oregon; sisters, Danielle (Ed) Rumbold of Colorado and Tammy (Shawn) Howell of Oregon; and several nieces and nephews.  She was preceded in death by a sister, Melanie Will.

At the present time her family will remember her privately.  A family memorial gathering will be held later.

Those who wish are asked to consider memorial contributions to the Otsego County Animal Shelter.

To order memorial trees or send flowers to the family in memory of Irene Estelle Larsen, please visit our flower store.