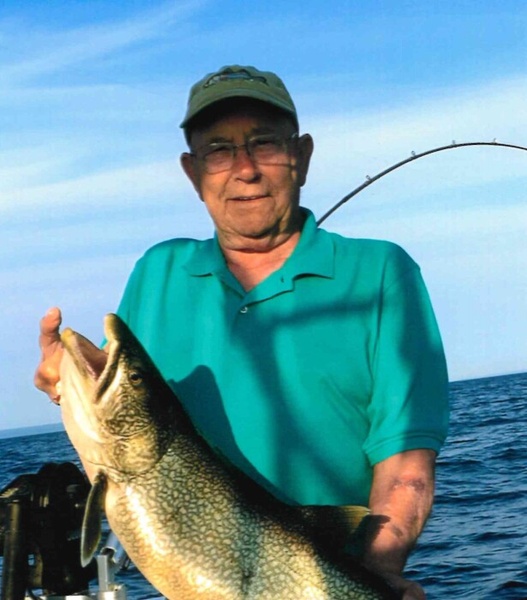 Jerry Claude Sweet, 84 of Boyne City, passed away on Saturday, December 4, 2021 at McLaren Northern Michigan. Born in Midland, MI on June 26, 1937, Jerry was the son of Frank and Faye (Wells) Sweet.

In 1956, Jerry graduated from East Jordan High School. He met the love of his life, Patricia who also graduated the same year, and were married on November 24, 1956.  Jerry and Pat lived in Midland for a few years after their marriage and also lived in Mt. Clemens. They moved to Mancelona in the early 1960’s and later back to East Jordan. For many years, Jerry worked as a maintenance supervisor at Wolverine Power. Jerry enjoyed attending his high school class reunions and seeing old friends. On Sundays, he looked forward to taking a drive and then out to dinner at a new place afterwards. He loved fried chicken and fish! He was a volunteer at the East Jordan Fire Department as a Fireman and on the Rescue Dive Team. Jerry enjoyed spending time with his family, ice fishing, boating and being outdoors. In the early 1990’s Jerry and Pat began spending summers in the Upper Peninsula at Little Lake Harbor on Lake Superior and winters in Key Largo, Florida at Kings Kamp.  In 2016 they moved to Boyne City to be near their family. One of his greatest joys in life was when the great-grandchildren would stop by the house for a visit, it truly made his day. He loved visiting with his neighbors and it was something that he enjoyed, keeping up with all of their news and sharing stories.

He is preceded in death by his parents; a son, Brian Keith Sweet in 2001; his wife, Patricia Sweet in 2018; a grandson, Matthew Sweet in 2020 and his step-mother, Ethel Sweet.

Jerry’s family has chosen to remember him privately.  Those who wish are asked to consider memorial contributions to the Charlevoix County Humane Society.

Please share your memories and personal messages with the family on his tribute wall.

To order memorial trees or send flowers to the family in memory of Jerry C. Sweet, please visit our flower store.