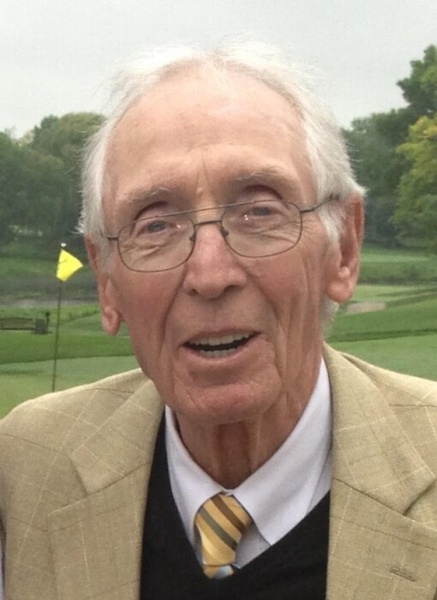 John Charles Dingens was born an only child in the hardscrabble steel city of Lackawanna, NY, and left a legacy of a successful college football career at University of Detroit, a long and fruitful career with Ford Motor Co, a college sweetheart wife and six children who have given him 21 grandchildren to carry on his name and memories.  He was an Irish Catholic in lineage and in heart, and considered himself “lucky in cards and lucky in life.”

John passed away in peace in northern Michigan on March 29, 2021 at age 83, surrounded by his family.

He is survived by his loving wife of 60 years, Nan Lisbeth (nee Hentschel) Dingens, and his children and their families: John “Jed” Dingens of Corunna, MI, and John Paul, Adam, Ana, Ava, Chloe and Eli; Jeanine and Wells Lifka of Warrenville, IL, and Welling, Nick and Katie; Greg and Julie Dingens of Chicago, IL, and Kelley, Kevin, David and Derek; Matt and Marilyn Dingens of Naperville, IL and Matthew and Bridget; Colene and Matt Williams of Louisville, KY, and Mason, Miles and Madalene; and Colette Dingens of Clawson, MI and Everett and Luc.

John grew up in a modest shared family house in Lackawanna, born at the tail end of the Depression to Muriel (nee Murphy) (1905-2001) and John Sydney Dingens (1907-1984).  He lived with various family members of a sprawling Irish Murphy clan, including his maternal grandmother and several of his maternal uncles, and many of his cousins. His paternal great-grandfather was one of the proprietors of Dingens Brothers Company, a prosperous merchandiser, landowner and publisher in Buffalo NY after whom Dingens Street is named.

He attended Our Lady of Victory grade school, spend freshman year at Bishop Timon HS, and finished at Father Baker High School (he would point out this was after it converted from a school for delinquents) and played basketball and one season of football his senior year. During high school he worked hard to earn money, working as a gandy-dancer at the railroad, delivering and hauling ice blocks, and spending one summer in the sweltering mills of Bethlehem Steel, a rite of passage for Lackawanna Irishmen.

Despite limited experience, he was offered the chance play football in college, and chose University of Detroit, where he ended earning Catholic All-American honors for two years.  More importantly, he met Nan, his future wife, when she was still in high school, at a St. Patrick’s Day party (naturally) his freshman year, and they dated even as she also enrolled at U of D two years later.  They were married on August 20, 1960 after he graduated and after he finished six months in the Army Reserve.

Despite being drafted by the Chicago Cardinals in 1958, and subsequently pursued by several other pro football teams, he chose the more lucrative (at the time) business career option, accepting a position with Mobil Oil.  Ford Motor Company soon recruited him, and in 1963 he accepted a position with Ford that would lead to a 31 year career that saw him promoted as the youngest District Manager ever (at age 33) and led to leadership posts in 7 different states. He and his family lived in Southfield MI (twice), Toledo OH, Indianapolis IN, Cincinnati OH, New Orleans LA, Naperville IL (twice), Denver CO, Bloomfield Hills MI, and Charlotte NC.  He and Nan enjoyed 35 exotic Ford-sponsored trips to all corners of the globe, which is pretty good for a guy whose family couldn’t afford a family vacation growing up.

When John and Nan retired they wintered in Naples FL, where they enjoyed 20+ years in the Stonebridge Country Club community, and spent the rest of the year in their beloved family lake house in the Point Nipigon resort in northern Michigan.  The magical summers at Point Nipigon became a long-time family tradition enjoyed by three generations.

John loved playing almost any sport, all types of card games, chili-dogs, fried bologna, white wine with ice cubes, pretzels and dip, and watching almost any sport, especially involving his kids and grandkids. He loved dancing with his wife, singing in church, and carrying on his mother’s devotion to saying the daily rosary. He was the master of the one-liner, the tennis dink, the euchre loner, and the left handed basketball shots to knock you out in HORSE.

John was a man who got the big things right.  Faith, family, hard work and integrity. Go in peace dad.

A funeral service will be held at 11am on Monday, April 5th at St Anthony of Padua Catholic Church, Mackinaw City, MI.  A memorial celebration will occur later in the year.

To order memorial trees or send flowers to the family in memory of John Charles Dingens, please visit our flower store.