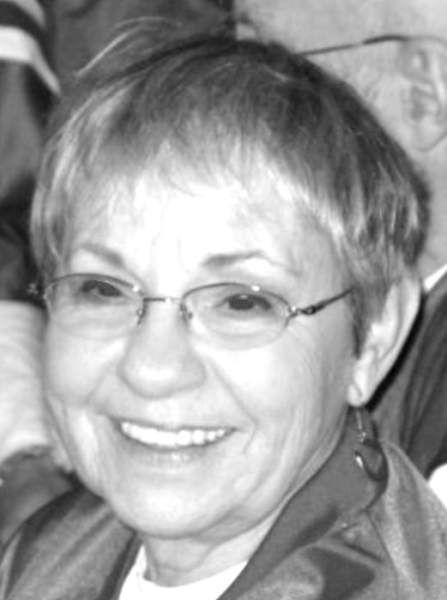 Judith Gay (Pappas) Willey, 82 of Charlevoix, passed away Monday, March 23, 2020 at Boulder Park Terrace in Charlevoix.  She was the first born of Allen Pappas (later Col.) (1911-1989) and Gladice Marie Martin (1913-2004) on 15 December 1937 in Denver, Colorado.  Judy had a loving younger sister, Susan. She married Donald John Holtzinger and had four children: Michael David, Susan Joy, Kimberly Rae, and Allene Marie.  In 1980 she married Ron Willey in Melbourne, Florida and moved to Charlevoix in 1995.
Judy was an accomplished saxophone player and was always eager to play in city bands such as Melbourne, Charlevoix, Harbor Springs, and East Jordan.
Her daughter Susan had this to say, “She was obviously a wonderful musician and it was a lifelong love of hers, for sure. The City band was hugely important.  She helped start the Up North Big Band and was a quartet player. She was a very talented artist in so many areas.  How do we narrow that one down? She was fun, spirited and involved with her church for many years.  Her church was a huge part of her life.  Her friends in Charlevoix were also so important.  I would say, she was at her happiest while living in Charlevoix. She was a great grandmother, 4. Grandmother of 14! Wow.... She also, important, had a great laugh and was fun to be with!  Always, enjoyed her company....obviously.”

Her daughter Lena had this to say. “The greatest gift mom gave me was laughter. Whether it is finding humor in not so humorous situations : when I was in 5th grade (pretty sure) the plug on our vacuum needed to be replaced. She told me grandpa had taught her how to do it and she was going to teach me. She went into the kitchen, got a paring knife and as she sat cross legged on the couch proceeded to saw at the cord. Unfortunately she forgot one tiny detail & that was to unplug it first! There was a loud noise, some sparks and as I recall she did let out a sort of “woop” as she popped up a bit off the couch. When all the smoke settled, the knife had a circular hole on the edge, Moms hands, face and chest were black with I guess smoke, soot? And some hair was singed. She looked at me and started cracking up and said something like “I think cutting the old plug off was the second step, not the first. “Oh well” and kept laughing. She taught me being silly was OK and laughing at silly was even better. So many great memories are surrounded by unremarkable moments made remarkable because someone started to laugh. It would become contagious and finally have to stop because either your stomach was cramping up, you couldn’t catch your breath, or as we all got older you might pee! I’ve learned being able to laugh is the greatest gift I could have been given.”

The Charlevoix Sax Quartet was one of the smoothest sounds in Northern Michigan and was possibly the high point of Judy’s musical career. In addition to her love of music, she was very creative in furniture refinishing and artistic decoration.  She was one of the backbones of the “Chairity Auctions” held for several years by the Charlevoix Congregational Church. The auctioneer called her “Judy of Charlevoix” with each of the items of decorated furniture that she made for the event. Perhaps she will be remembered as the Grandma Moses of furniture decorating.

She loved Charlevoix, the Mid-West culture, her many friends in Charlevoix, and was loved in return. The lilt of her laughter in the North Woods and the sunshine of her smile has set on us for now, but will be heard and rise again in the next life.

Arrangements are by Gaylord Community Funeral Home & Cremation Service.  Please share your memories and personal messages with her family at www.gaylordfuneralhome.com

To order memorial trees or send flowers to the family in memory of Judith G. Willey, please visit our flower store.