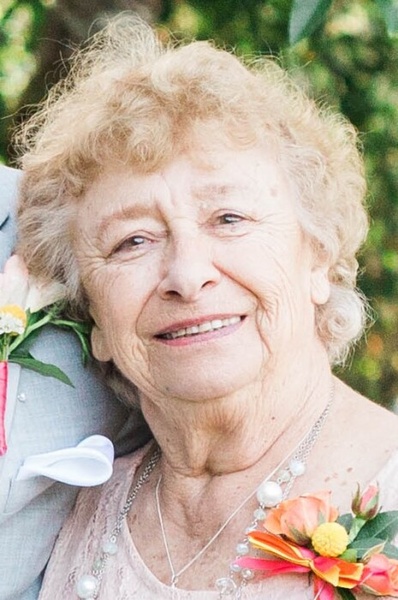 Born in Detroit, Michigan on April 16, 1929, she was the daughter of John and Olga (Marske) Schigoda.  Marilyn grew up in Detroit with her parents, her sister Adaleen and her brother Leroy.  She was a 1946 graduate of Detroit’s Denby High School.

Marilyn helped put herself through college working in state run youth care homes in the Detroit area.  She attended EMU where she received her teaching certificate, and later she received her bachelor’s degree.

Marilyn taught school in Michigan and also worked with her husband, Marvin Cron, at Sandhill Acres Nursery which they owned in Okemos.  Marilyn and Marvin had four sons, Michael, Mark, Matthew, and Mitchell.   Later they moved to Pueblo West, Colorado where Marilyn taught elementary school, never said no to a game of Cribbage, and spent many hours tending to her garden oasis.  When she retired in Colorado, Marilyn used her time in service at church, where she poured her heart into teaching Vacation Bible School every summer and crafting Angel Pins with her ladies’ group.

In retirement she enjoyed traveling with her second husband, Lawrence Grey, in their motor home.  After his death and the death of her sister’s husband, Marilyn moved to Gaylord to be with her sister, Adaleen Harden.  Both widowed, the two became inseparable.  Marilyn became an important part of Adaleen’ s entire family.

ShIe was a lady of strong faith, with her favorite scripture and life verse being John 10:10b   Jesus speaking. …”I have come that they may have life and have it more abundantly”.  In Gaylord she became an active member of Peace Lutheran Church where she taught bible school.  Her family will remember her for her beautiful “taste for living”.  She enjoyed everything and everyone, always finding joy and happiness in so many things.

She is survived by her four sons, Michael (Michelle) Cron of Rogers City; Mark (Tami) Cron of Boise, ID; Matthew Cron of Denver, CO; and Mitchell (Mary) Cron, of Hilo, HI.  She is also survived by her 5 grandchildren, Michael Lee Cron; Rachel (Alex) Leong; Scott (Christy) Cron; Michael John (Alexandra) Cron and Makana Cron; as well as great grandchildren Benjamin and Melanie; her sister, Adaleen Harden of Gaylord and her family; and a sister-in-law, Margaret Schigoda of Charlotte, NC.  She was preceded in death by her parents; her first husband Marvin Cron, her second husband, Lawrence Grey and her brother, Leroy Schigoda.

A visitation/memorial service will be held at Gaylord Community Funeral Home & Cremation Service on Friday, July 17th, 2020, with Visitation at 10:00am and Memorial Service at 11:00 am.

Those who wish are asked to consider memorial contributions to The Life Enrichment Program at The Porches of Gaylord, where she spent her final few months.

To order memorial trees or send flowers to the family in memory of Marilyn M. Grey, please visit our flower store.