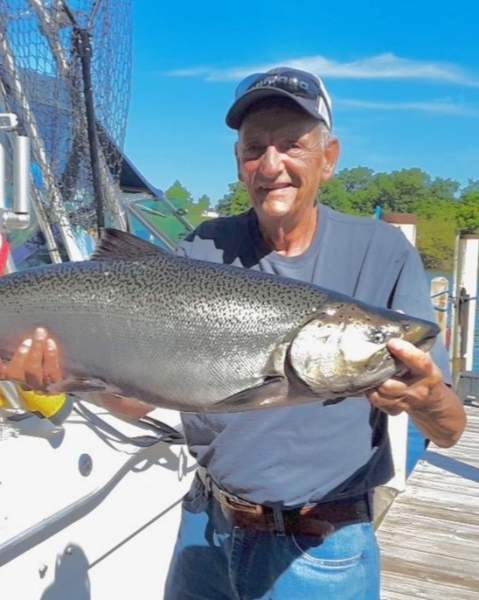 Robert Dale Shampine (73) of Gaylord passed away peacefully on Thursday, November 10, 2022, at McLaren Northern Michigan Hospital, with family by his side.

Bob was born in Cheboygan, May 27, 1949, the son of Robert and Christina (Kolaski) Shampine.

Bob served in the United States Navy from 1969-1973 during which he was a damage control man, welder ship fitter, and hull technician.

After the Navy he worked for B&C and Country Star until 1984, where he then worked 36 years as a refrigeration engineer for REI which changed to Ingersoll Rand, then Refrigeration Specialty and finally Hussman.

On September 16, 1977 at Cross in the Woods Shrine in Indian River, he married Barbara Ann Meden, the love of his life.  They were married for 42 wonderful years, where they created many lasting memories and shared lots of laughs.

Bob was a member of St. Mary Cathedral. He was an outstanding father, extremely devoted husband, and one of the most thoughtful and giving individuals you would ever want to meet.  He has touched so many lives, either with his way of words and hilarious stories, giving of his time to help out others by using one his many talents, because he was truly a jack of all trades, or cooking up one of his favorite meals or desserts, from his mom’s recipes, and sharing with family and friends.

Family was extremely important to him, he loved attending his sons sporting events and coaching his hockey team, hunting and fishing adventures with his son and good buddies, and getting together for family gatherings, especially with all the kids around who brought him so much joy!

Surviving is his son, Todd, of Gaylord.  His brothers Richard (Ruth) Shampine, Jerome Shampine, Jeffery (Susan) Shampine,  his sisters Jolene Shampine, and Lisa (Scott) VinCamp along with many nieces and nephews.  Also, all of Barb's family.

He was preceded in death by his wife, parents, his father and mother-in-law, Edward and Mary Meden, a brother Daniel “Skeeter” Shampine, nephew Brian Huntley, and a great niece, Emmalynn Brach.

Funeral services will take place 11:30 AM Monday, November 14, 2022 at Gaylord Community Funeral Home & Cremation Service where visitation will begin at 10:00 AM. Burial will follow at Hayes Township Cemetery.

Those who wish are asked to consider memorial contributions to The American Diabetes Association.

Please share your memories and personal messages with the family on his guestbook below.