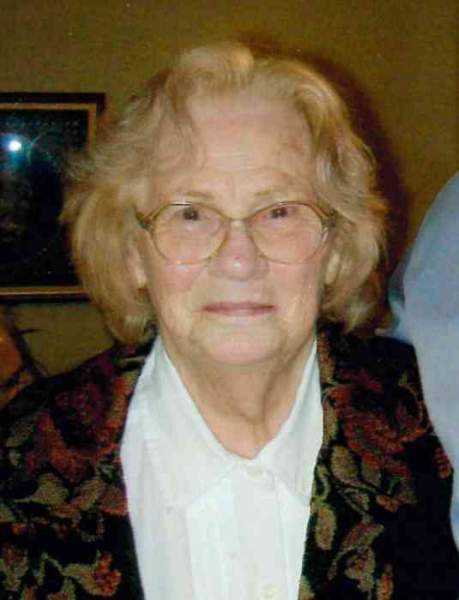 Born in Elmira Township on September 27, 1926, Roberta was the daughter of Robert and Zella (Noffsinger) Moorhead.  She graduated from Gaylord High School in 1944, and then attended business college in Bay City.

On March 2, 1946, Roberta was married to Lloyd A. Wolf in Gaylord where they raised their family and spent their lives together.  She was a dedicated, loving wife to Lloyd and mother to daughters, Connie, Barbara, and Rebecca.

She will be remembered by her family and friends for her love of nature and gardening, and her independent, fun-loving, adventurous, and generous spirit.

While her daughters were young, she led 4-H clubs for over 15 years, teaching sewing to many girls.  She sewed many of her daughter’s clothes and knitted sweaters for children and grandchildren, which are still being worn.  The family belonged to the Gaylord First United Methodist Church where Roberta was a Sunday school teacher.

They worked as a team in many ways. Lloyd and Roberta operated and owned the Rollaway Roller Rink ran the rink for years.   Lloyd operated Lloyd Wolf Construction, and Roberta was the bookkeeper for the business.

In her 40’s, she pursued her passion for flying, becoming a licensed pilot and a member of Civil Air Patrol.  She and Lloyd enjoyed snowmobiling and motorcycling with their many friends.

She was preceded in death by her brother and sister-in-law, Howard and Marion; and grandson, Todd.

Roberta’s family will visit with friends from 1:00-3:00 PM Saturday, November 16, 2019 at Gaylord Community Funeral Home & Cremation Service, followed by funeral services at 3:00 PM.   Burial will take place in the spring at Fairview Cemetery.  Those who wish are asked to consider memorial contributions to

To order memorial trees or send flowers to the family in memory of Roberta Lou Wolf, please visit our flower store.