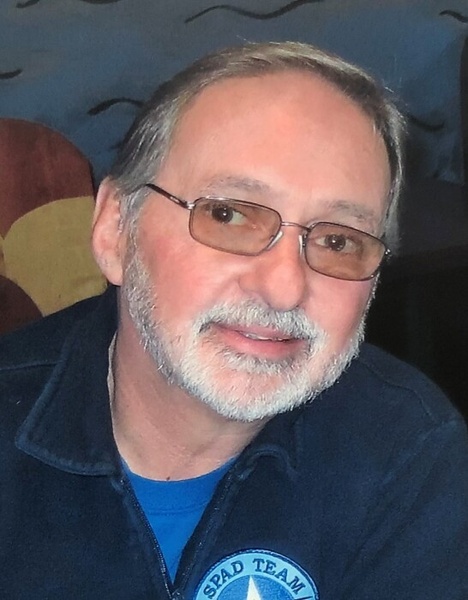 Russell J. Valeri, 72, of Gaylord, passed away on January 1, 2021.  Russ was a dear husband, father, brother, grandpa, uncle, and friend.  The list of friends during his busy life is endless.

Born on June 18, 1948 in Detroit, Russ was the son of John (Giovanni) and Vera (Williams) Valeri.  He is survived by his loving wife, Irene (Rene) Schoenherr Valeri, whom he married on November 28, 1998.  Also surviving are his two daughters, Lisa Valeri of Fowlerville, MI; Jennifer (Michael Maxner) Valeri of Pasadena, CA; his only grandchild, Miles Maxner; his one brother, Roger (Sandy) Valeri; his two sisters, Marilyn Colton and Kathie (Dennis) Carroll; and many relatives.

Russ was preceded in death by his parents; his second mother, Armeda, who raised him from 18 months when his biological mother passed away; and his brother-in-law Clark Colton.

Growing up in Detroit and Livonia, Russ lived in a number of Michigan cities over the years.   He volunteered at an early age in the United States Army during wartime Vietnam and served with honor.   Russ loved cars long before he could even drive.  He held several jobs as a mechanic at a number of gas stations and car dealerships.  This prepared him for his career of almost 35 years with Chrysler Corporation as a engineer - so appropriate with his passion for cars, particularly MOPAR classics.  He purchased his 1971 Dodge Charger SE in the 80s, his pride and joy.  It always had a prominent spot in the garage (and still does) when he wasn't cruising with friends and/or winning trophies at any number of car shows.

After retirement, Russ volunteered at Selfridge Air National Guard Base in Harrison Township, working with a masterful team building a World War I SPAD airplane from scratch, contributing his mechanical skills, and assisting with the restoration of many eras of planes.  He was a master mechanic and craftsman himself, with a true gift of being able to fix and build just about anything.  He appropriately became known as the classic Mr. Fixit to anyone who knew him.  He also loved to take anything old and make it new again, or tweak any number of things to make them just that much better.

Boating was a passionate hobby of Russ' for well over 30 years.  Both of his daughters remember taking countless boat trips as they were growing up, and he continued his passion until just a few years ago.  From there, Russ turned to golf as his summer activity.  He shared many happy times with a variety of friends, particularly good buddies from the men's casual league, both on and off the course.   Winter sports brought him and Rene new adventures enjoying snowmobiling, cross-country skiing, and snow-shoeing from their home in the Michaywe community of Gaylord.

Russ' first and most dominant love was for his daughters, wife and family.  He always put them above anything else, and looked forward to all occasions where family would gather.  His newest treasure became his grandson, now five years old.  Miles dearly loves his grandpa.  They will always have a special bond.

Russ made friends easily and would be available to help anyone, anytime, no matter the situation.  His family and friends all know that he would come to their rescue at the drop of a hat.  His love for people and willingness to be available brought him much admiration and respect.  In return, he was dearly loved by so many, in numbers too big to count.  The gap he has left in countless lives will never be filled.  But his love and selflessness will be honored and cherished forever. We love you, Russ!

A private memorial gathering will take place at Great Lakes National Cemetery on January 12 in Holly, MI.  In lieu of flowers, those who wish are asked to consider memorial contributions to Otsego Community Foundation or VFW Local Post 1518, both of Gaylord.

To order memorial trees or send flowers to the family in memory of Russell John Valeri, please visit our flower store.
Send a Sympathy Card