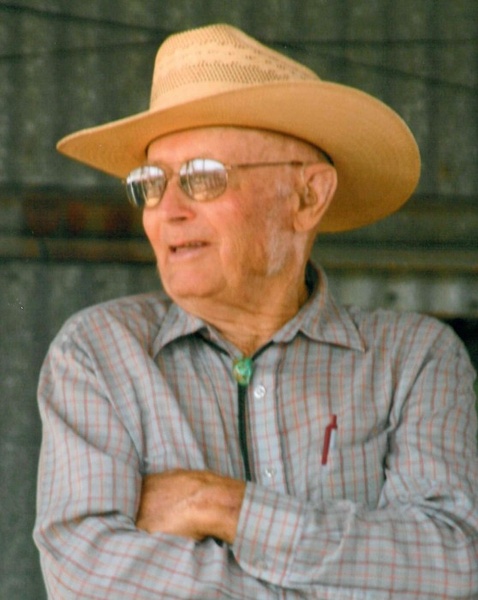 Stanley Kenneth Sloan, 98 of Wolverine, passed away at home surrounded by his family on Tuesday, April 7, 2020.

Born in Saginaw, Michigan on June 12, 1921, he was the son of Stanley K., known to everyone as Kenneth, and Hazel (Whitten) Sloan.

Stan served his country honorably in the United States Army during World War II in the Asia-Pacific Theater as Squad Leader and Staff Sergeant in the 124th Cavalry Regiment, the last mounted cavalry division in the U.S.  He served from 1943-1945.

While visiting his grandfather in Wolverine, Stan met and married the love of his life, Emma Marie Ealy in Wolverine on August 11, 1948.  They set up housekeeping on property purchased from Marie’s family, and have been there ever since.

Stan was a longtime farmer and a well-known auctioneer around northern Michigan.  He was active in the 4H Livestock program in both Cheboygan and Otsego Counties, volunteering his time as mentor and auctioneer for both county programs, and for many other non-profit organizations as the need arose.

Stan was a member of the Veterans of Foreign wars, American Legion, Disabled American Veterans and the Michigan State Auctioneers Association.  He was a long time member and trustee of Wolverine Congregational Church and served on the Nunda Township Board of Review for nearly 50 years.  He was also an avid hunter and outdoorsman, actively involved in the NRA and local chapter of National Turkey Federation.

Stan was preceded in death by his parents and siblings, Jean Kent of California and Don Sloan of Texas.

Due to restrictions on public gatherings, a memorial service will be held at 11:00 AM Friday, June 12, 2020 at the LUMBERJACK PARK PAVILION in Wolverine.  Those who wish are asked to consider memorial contributions to Wolverine Congregational Church.

To order memorial trees or send flowers to the family in memory of Stanley K. Sloan, please visit our flower store.