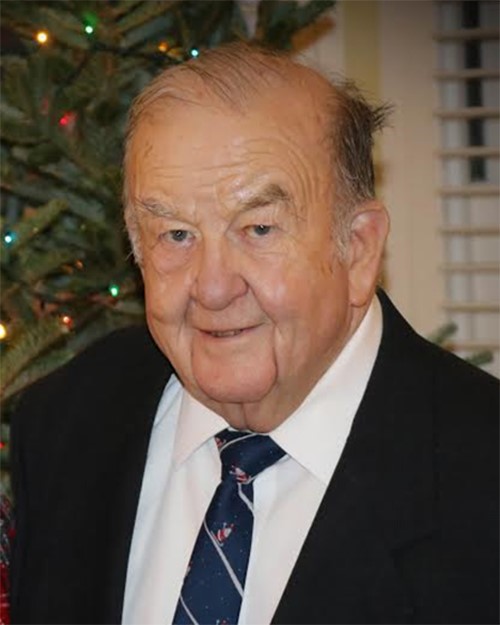 Thomas Patrick Roach, 87, passed away peacefully June 4th, 2021 in Gaylord, Michigan.  A Funeral Mass at St. Mary’s Cathedral in Gaylord is scheduled for September 11, at 11:00 AM.

Born in Detroit on November 3, 1933, he spent the first half of his life living in the northwest side of Detroit.  He attended Gesu Elementary School, the University of Detroit High School (Class of ’51) and graduated from The University of Detroit College in 1956 with a bachelor’s degree in Business Administration.  Soon after graduating, he married his true love, Barbara A. Roach (McCallum) on June 23, 1956 at Gesu Church — where it was rumored that his mother, Irene, spent a few irate moments out on the church steps yelling and pointing up at the sky, all of which ire was directed toward Tom’s brother, Jack, whose only means of attending the wedding Mass involved buzzing the bell tower in his UAF T-33 Fighter Jet, courtesy of a slight detour from his usual Air Force flight training route.

Thomas and Barbara settled into their new life together and soon began adding to their nest with their first born in 1957 and their last in 1972, with six more in between.  Tom spent almost his entire career as a partner in the John K. Lark Company, primarily supplying specialized tools and equipment used in automotive manufacturing.  In 1970, Tom and Barbara fulfilled one of their most treasured dreams by purchasing a beautiful lakefront lot on the eastern shore of Otsego Lake in northern Michigan, close to where generations of the Roach family enjoyed their summer vacations.  Before long, with help provided by his oldest children and a builder friend, the Roach family cottage began to take shape beside the sandy shoreline.  With the temporary addition of a pot belly stove he nicknamed “Old Betsy”, the cottage became the family’s all-season destination, refuge and gateway for experiencing the great “Up North” of Michigan.  Many treasured memories were made around the summer campfires, swimming, water skiing, canoe adventures down the Au Sable and Manistee Rivers, ice skating on the lake, and snow skiing at Mt. Mancelona and Otsego Ski Club.

Tom enjoyed family time skiing, Sunfish sailing races, sunset boat rides with his trusted Molly-Dog commanding the bow, golfing, hunting and fishing, and serving as team captain of the Roach family for beach baseball games against his good friend and archrival, Terry Nagle, team captain of the Nagle kids.  Upon retirement, the family cottage became the permanent home for Tom and Barbara, where Tom enjoyed working as a golf ranger at Tree Tops Resort.  He was an active Board member of the Otsego Lake Association where he helped organize the annual 4th of July Fireworks show over Otsego Lake.  He was especially proud of his track record in always “selling out” the Fireworks Raffle Tickets, which raised the money to put on the show.  He was also a proud member of the Ancient Order of Hibernians, where he enjoyed many opportunities to celebrate his Irish heritage, including while being honored as the Grand Marshal of the Gaylord St. Patrick’s Day Parade in 2010.

To order memorial trees or send flowers to the family in memory of Thomas Roach Sr., please visit our flower store.
Send a Sympathy Card