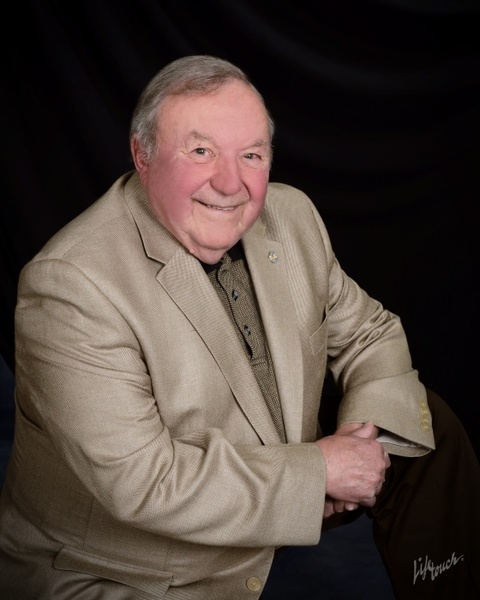 William (Bill) Edward Ahrenberg passed away peacefully at home in Gaylord on February 6, 2021. Bill was born on June 12, 1931, in Detroit Michigan to Edward and Marguerite (VanBuren) Ahrenberg.

He spent most of his childhood years in Wayne, Michigan.  He attended Wayne High School where he met and fell in love with his classmate and future wife Margie Smith.

Upon graduating high school in 1949, Bill joined the US Army.  He was fortunate to receive training in telephony that would open opportunities for a good career in civilian life.  Bill went to war in Korea in 1950 and 1951.  He was very proud of his service as a signalman with the 1st Cavalry Division.  He came home and in 1951, and married that high school sweetheart, Marjorie.  Together they went to Georgia where he finished his army tour of duty as an instructor in the Signal Corps.

After his discharge, they returned to Wayne where he went to work with Michigan Bell Telephone Co. He retired in 1987 after 34 years with them.

In 1960, Bill and Marge, with their three sons, built a cabin at Otsego Lake where Marge and the boys spent most of their summers and Bill was a weekend commuter.

While working for the telephone company, Bill also had time for several community organizations.  He was a member of the Wayne Jaycees.  He served as a Junior Achievement Advisor.  He was a member and past president of the Wayne Kiwanis Club and a member of the Ann Arbor Rotary Club.  He was a charter member of the City of Wayne Economic Development Corporation.  While their 3 sons were young, he was the Cubmaster and a committee member with the Boy Scouts of America sponsored by his Wayne First Congregational church.  He also served as Chairman of the Board of Deacons for the church for several years.

Bill loved sailing.  After years of sailing at Otsego Lake he and Marge took three different “windjammer” cruises in the Caribbean.  It was there that they discovered bare-boat charters, and for several years they enjoyed frequent sailing adventures in both the British and US Virgin Islands and the Bahamas.  In the winter he couldn’t wait to hop on his snowmobile.

In 1987 Bill and Marge made Gaylord their year-round permanent home.  Bill served on the board of the Otsego Lake Association.  For many years he was a volunteer driver of ACS cancer van and an eager participant in the Relay for Life.  He was a member and past commander of VFW Post 1518. He was a member and later Chairman of the Otsego County Veterans Affairs board.  Bill joined the First United Methodist Church in Gaylord and served as a volunteer in many activities.

A memorial service will take place 11:00 AM Thursday, February 11, 2021 at the First United Methodist Church in Gaylord where the family will visit with friends beginning at 10:00 AM until the time of services. Rev. John Naile will officiate. In lieu of flowers, those who wish are asked to consider memorial contributions to the First United Methodist Church or to Hospice of Michigan. Please share your memories and personal messages with the family at www.gaylordfuneralhome.com

To order memorial trees or send flowers to the family in memory of William "Bill" E. Ahrenberg, please visit our flower store.